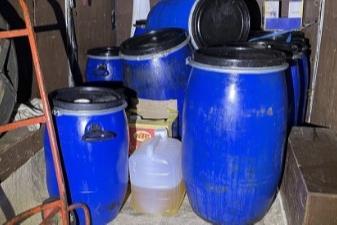 Organised criminals across the UK are stealing cooking oil to fuel diesel cars, police in Yorkshire have warned, and they have urged pubs, restaurants and takeaways to increase their security.

The first incident in North Yorkshire occurred outside a pub in Cracoe, near Skipton, at around 3.20am on Thursday May 19.

Unknown offenders stole a barrel of used cooking oil and a child’s toy sit-on car. A white van was seen near the property at the time of the incident.

Then on Saturday May 21 at around 8.30am, three men in a black 02-reg Mercedes Vito panel van made off empty handed after being challenged by staff members at the rear of a pub in Grassington.

However, just after 2pm the same day, the black van arrived at the rear of a pub in Settle where a full barrel of used cooking oil was taken. It is believed it was poured into another container before it was placed in the van.

Witnesses or anyone with information about suspicious activity related to the incidents are urged to call North Yorkshire Police on 101, select option 1, and speak to the Force Control Room quoting reference number 12220088203.

Anyone wishing to remain anonymous can pass details onto Crimestoppers on 0800 555111 quoting the same reference number.

North Yorkshire Police warned motorists that filling their tanks with such products is likely to be very harmful to modern diesel engines with fuel injectors and emission control devices put at serious risk of clogging.