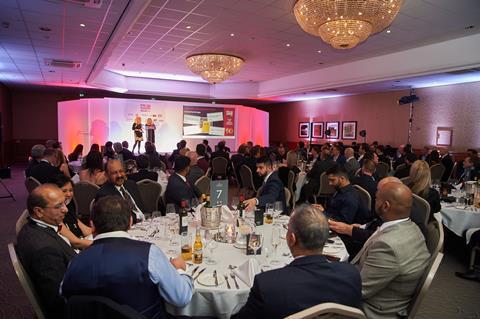 The Top 50 Indies continue to expand and thrive, as the challenges of the past two years and the emerging transition to electric vehicles has failed to dent their positive outlook, according to the latest listing of the UK’s biggest independent retailers.

The annual report was unveiled at last night’s Top 50 Indies event at The Belfry in Birmingham where retailers gathered to enjoy an evening of networking and entertainment.

Forecourt Trader editor Merril Boulton said: “Once again the Top 50 has shown great resilience and drive as well as stability, although there are signs that there may be changes afoot with both MFG and Applegreen in the market for buyers.

“But for now, we can report that the outlook in terms of opportunity for the sector is very much a positive one, and the Top 50 Indies are in very good health.”

The list revealed that another year of disruption thanks to Covid restrictions and fuel shortages did not dampen the appetite for expansion and development. Site numbers grew by nearly four per cent to 2,511 (up from 2,417 last year), meaning almost 30% - or one in three – forecourt sites are owned by the Top 50 retailers.

There were just two new entries, but 11 risers, while 16 held their position, and 21 slipped a notch or two.

There were no great surprises within the Top 10. MFG once again held the top spot with more sites this year (927 versus 911) thanks in part to its purchase of fellow Top 50 Indie George Hammond.

Firmly in the number two spot is EG Group with 411 sites in the UK – up from 396 last year, despite having to offload some to allow the Asda deal undertaken by its co-CEOs, the Issa brothers, in conjunction with TDR Capital, to go through.

Its new locations include 15 new-to-industry sites. However, EG’s activity in the UK still pales into insignificance when you realise it operates 6,339 sites across 10 countries.

But while the Top 5 held fast, Park Garage Group moved up to number six thanks to its purchase of 27 EG Group sites. SGN dropped a spot to number seven, and despite having more sites this year, Ascona Group dropped to number eight. Rounding off the Top 10 are Moto and Platinum Retail, in nine and 10 as per last year’s list.

In the 10-20 section of the list there was a bit of jostling for position, but all the companies are the same. Further down the rankings, there were a couple of really big movers: Tankerford, which was a new entry last year moved up from 33 to 24 with the addition of two sites. The company redeveloped its Mill Service Station last year and has plans for more redevelopments this year, so it is definitely ‘one to watch’.

Another Indie that leapfrogged many others to boost its ranking was Hockenhull Garages, which was a new entry last year and since then has risen 15 places from number 41 to number 26. The former Forecourt Trader of the Year winner acquired four new sites in the month of November 2021 alone.

Meanwhile, the two new entries in the Top 50 are from family-run firms: our current Forecourt Trader of the Year winner Exelby Services along with Rusdene Services, both of which were in our ‘Bubbling under’ section last time.

Across the Top 50, there is a common theme of investment. Of course, many companies are looking to acquire new sites, but the forecourt property market remains as competitive as ever, with Christie & Co recently reporting that there’s still an ‘insatiable appetite’ for buying forecourts. New-to-industry sites are an option for some players – EG Group opened 15, Platinum Retail three, while Rontec opened its first new-to-industry site in a number of years.

Many players are making the most of their existing sites by investing in redevelopments. Ascona, for example, has three site redevelopments planned for this year and a further nine projects over the next two years.

The top players are making huge network investments across the board, particularly MFG with its £400m spend on its EV charging operations. Others lower down the listing are dipping their toe in the water or taking a ‘wait and see’ approach.

Other areas for investment across the board are foodservice, particularly for EG Group with its drive-thrus and range of partner brands; plus its purchase of fast-food chain Leon and bakery chain Cooplands. And Pret A Manger entered the forecourt market thanks to its deal with MFG.

EG Group is also installing car wash facilities at its new-to-industry sites as car washing makes a resurgence following the legislation against modern slavery driving many illegal car wash operations out of business.

Retailers are also trialling different strategies as they search for opportunities in the future. EG Group and Elite Garages are trialling standalone convenience formats; while MFG is opening EV-only sites, as well as getting involved in EV charging beyond its own forecourt network.