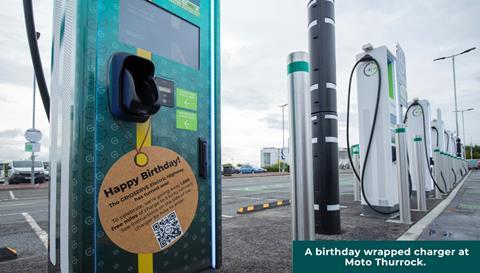 The number of charging sessions on the Gridserve Electric Highway has tripled since June 2021, the company is claiming, with a quadrupling of energy supplied, one year since it acquired the network from Ecotricity.

The company has also launched a news competition to give drivers the chance to win 1,000 miles of free charge across the network

Gridserve says its Electric Highway is now estimated to be one of the most highly utilised charging networks in the UK, now charging more than 100,000 EVs every month with net zero energy. The average charge time on the network has also decreased, in line with faster, and more reliable charging.

Over the past year, Gridserve has embarked on a multi-million pound programme to materially improve dependability, ease of use, and availability of chargers, including upgrading over 160 charging locations with new chargers, delivering an additional seven High Power Electric Super Hubs across the motorway network – each featuring a bank of 6 to 12 x 350kW-capable chargers, and opening a new flagship Norwich Electric Forecourt. Dozens of additional sites are also already under development and in construction.

The company reports that reliability - consistently reported as a number one priority for EV drivers - has significantly improved, and now stands at up to 99% uptime, with a goal of consistently driving this even higher.

Accessibility has also improved, with contactless payment – previously unavailable at all legacy chargers – now ubiquitous across the network, making it easier than ever to charge and go. Each Electric Super Hub also includes at least one extra-wide accessible charging bay for every six EV charging spaces, and across the network, all three connection types (CCS, CHAdeMO, and Type 2 for AC) are available, catering for every type of EV.

Gridserve says the rapid and far-reaching rollout has given huge numbers of drivers the confidence to know that they can depend on its network to provide a net-zero carbon charge at motorway service areas as they embark on long-distance journeys across the UK.

The Gridserve Electric Highway network is now integrated with dozens of maps, apps and navigation platforms, showing real-time availability of chargers and supporting journey planning across the UK.

Toddington Harper, CEO of Gridserve, said: “Only one year ago, we acquired the Gridserve Electric Highway with the aim of making EV driving an enjoyable, ultra-convenient and stress-free experience throughout the UK. From day one, we have been focused on delivering the best possible charging experience for drivers, and the response has been staggering, with more people than ever charging at motorway service stations. I’m proud to say that in just one year, Gridserve has made reliable EV travel across Great Britain possible – from Land’s End to John o’ Groats, and Pembrokeshire to Dover.”

“Whilst we have materially improved EV charging across the UK, we have only touched the surface in terms of delivering the full extent of our plans, and it remains our mission to continually improve our network to provide increasingly large numbers of EV drivers with the confidence that they can set off on any length of journey, to anywhere in the country, driving any type of EV, and have a better experience than making the same trip in a petrol or diesel vehicle.”

Drivers across the country are also invited to join Gridserve in celebrating the one-year anniversary of the Gridserve Electric Highway with the launch of a new competition. Through the competition, five drivers will win 1,000 miles of free charge across the entire network, including at our Electric Forecourts. To enter, drivers must find the Gridserve birthday-wrapped chargers hidden across the network and submit an image on Twitter or Instagram tagging Gridserve and using the hashtag #GSElectricHighwayBday, to enter the draw. The competition will close at 23:59 on Sunday July 31, 2022, and winners will be announced on Twitter and Instagram by 11am on Friday August 12, 2022.

The 1,000 miles offer would cover 96 days of an average commute. For parents, this could mean 208 school runs and for those up for a challenge, it could mean completing the National Three Peaks route of 462 miles twice while charging on renewable energy on the Gridserve Electric Highway. Available charging sites include the company’s flagship Electric Forecourts in Braintree and Norwich, Gridserve’s new high-power Electric Super Hubs in Rugby, Thurrock, Swansea, Exeter, Burton-in-Kendal, Heston and Severn View, plus Electric Hubs across the motorway network and popular retail destinations, enabling journeys nationwide.