Military takes to the road to deliver fuel to forecourts 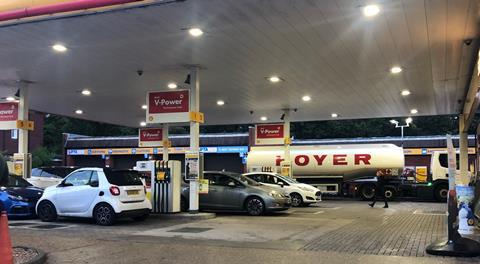 Queues form as word gets round of a fuel delivery

The military has begun delivering fuel to forecourts, as parts of the country, particularly the south east, continue to suffer chronic shortages.

Thousands of forecourt retailers have faced a week of abuse and incredible stress as they and their staff have attempted to manage long queues of frustrated motorists, who have headed to sites in huge numbers once word gets round that a fuel delivery has arrived, with pumps running dry within a matter of hours.

Although the situation has eased in many parts of the country, the latest estimates from the PRA are that around 20% of sites polled still don’t have fuel.

Now the government has said almost 200 military tanker personnel, 100 of which are drivers, are being deployed from Monday to provide temporary support as part of its wider action to further relieve pressure on petrol stations and address the shortage of HGV drivers.

The Government says the move comes alongside a range of measures it is taking to ease temporary supply chain pressures in food haulage industries, brought on by the pandemic and the global economy rebounding around the world.

The measures include a bespoke scheme allowing up to 300 foreign fuel tanker drivers to immediately work in the UK on a temporary basis - (subject to immigration checks, and endorsement from the Department for Business, Energy and Industrial Strategy BEIS) and stay to work until the end of March 2022 . This forms part of the temporary immigration arrangements announced last week to help provide short-term relief for the food and fuel industries and ensure the stability of the UK supply chain in the run-up to Christmas. It also covers 700 food haulage drivers who will arrive from late October and leave by 28 February 2022.

Steve Barclay, Chancellor of the Duchy of Lancaster, said: ”The Government has taken decisive action to tackle the short-term disruption to our supply chains, and in particular the flow of fuel to forecourts. We are now seeing the impact of these interventions with more fuel being delivered to forecourts than sold and, if people continue to revert to their normal buying patterns, we will see smaller queues and prevent petrol stations closing.”

Defence Secretary Ben Wallace said: ”Across the weekend over 200 military personnel will have been mobilised as part of Operation Escalin. While the situation is stabilising, our Armed Forces are there to fill in any critical vacancies and help keep the country on the move by supporting the industry to deliver fuel to forecourts.”

Business Secretary Kwasi Kwarteng said: ”Thanks to the immense efforts of industry over the past week, we are seeing continued signs that the situation at the pumps is slowly improving. UK forecourt stock levels are trending up, deliveries of fuel to forecourts are above normal levels, and fuel demand is stabilising.

”It’s important to stress there is no national shortage of fuel in the UK, and people should continue to buy fuel as normal. The sooner we return to our normal buying habits, the sooner we can return to normal.

”However, we want to see employers make long-term investments in the UK domestic workforce instead of relying on overseas labour to build a high-wage, high-skill economy.

”Visas will not be the long-term solution, and reform within the industry is vital. In addition to short-term fixes, the Government is also working with industry to find long-term solutions to the shortage of HGV drivers and encourage more people to enter the logistics sector through improved testing and hiring, with better pay, working conditions and diversity.

”In line with this approach, the Government and freight associations are now collaborating to drive up the standards of lorry parking facilities - helping to make the HGV industry more attractive for prospective drivers, and supporting the wellbeing of those currently working in the sector.

”This ongoing work will build on the 24 interventions we have already made to tackle the shortage of drivers, which includes an immediate increase in HGV testing and new skills bootcamps to train up to 4,000 more people to become HGV drivers.”

RAC fuel spokesman Simon Williams said: “While the fuel delivery situation continues to improve in many areas, that’s sadly not the case right across the country. Those drivers that rely on independent forecourts, especially where there aren’t any supermarkets selling fuel, may still be struggling to fill up or be faced with queues.

“Sadly, smaller petrol stations appear to have been hit particularly hard by so many people refuelling over the weekend and draining their stocks. As their supply chains aren’t as robust as the larger retailers’ many are still struggling to get the deliveries they so desperately need. We know that while these independents don’t sell as much fuel as the supermarkets and oil-company run forecourts, they are still very important to drivers.

“RAC data confirms that nationally things are improving, but are not yet back to normal. Last week our patrols still dealt with nearly five times the number of out-of-fuel breakdowns that they would typically attend. In contrast, on Monday when the problem was at its worst they attended 13 times more than on a normal day.”