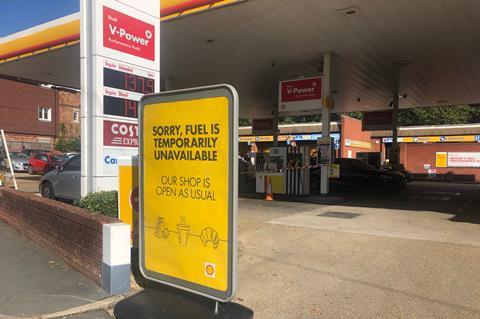 Top 50 Indies have seen multiple sites run dry with no indication when they will next get a delivery.

Sej Sejpal of Platinum Retail, which was ranked 10th in the most recent Top 50 with 31 sites, said he currently had nine BP sites which had had no fuel for four days with no indication of when he would receive deliveries.

On deliveries he said: “Shell are not too bad, but BP are struggling. At Shell sites I’m waiting half a day to a day for deliveries but with BP its one to five days.”

He said there had been panic buying at all of his sites and a number of arguments on the forecourts between queuing customers. Staff have been out on the forecourt directing the traffic.

Referring to the government’s pledge to bring in army drivers, he said: “They should have had the army out from day 1. Visas won’t solve the problem. They just need to get the product to the sites.”

Kris Navaratnam of Krisco Services Group, which was ranked 47th, has one Esso site and four BP.

He commented: “The Esso site served by Greenergy has been excellent. I used to get three tankers a week but since the panic buying began I’ve received a delivery every day. Sales have more than doubled.”

However, he said BP sites were already suffering outages before the panic buying began and since it started there has been one load delivered to two sites, both of which sold out in a day, and all four sites were dry.

He said: “BP has always been my favourite brand but not any more. Now it’s whichever brand can deliver the fuel. Customers don’t care about the brand, they just want the fuel.”

He added: “When I took over the Esso site I wanted to transfer to BP but a nearby BP site objected. They did me a real favour.”

In Wales the situation has started to ease. Kurt Williams of 25th ranked DK Forecourts, said: “Things have calmed down a lot, but there are still sporadic queues at some sites.”

At the height of the panic staff were on the forecourt marshalling the queues and sales were limited to £30. Kurt said most customers had been understanding but there had been a few grumbles about the limit.

The company has Esso, Texaco and Gulf sites and he said Greenergy’s Esso deliveries have been excellent, and Certas has also done a good job.

However, the Texaco site, which is supplied from the Cardiff depot, ran out of fuel five days ago and he has no indication of when it will get a delivery.