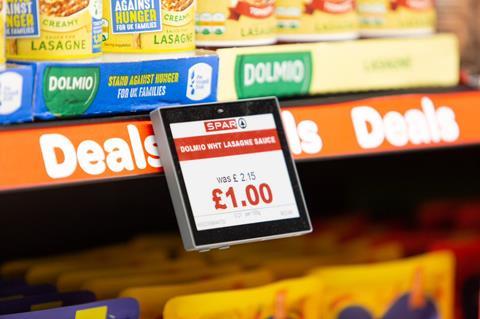 Henderson Technology is celebrating the 50th installation of its electronic shelf edge labelling system (ESEL), which works with its EDGEPoS system, at a Spar filling station in Northern Ireland.

Independent Spar retailers Helen and Gavan Wall have opened Landscape Filling Station on the Crumlin Road in Belfast after a £3m investment.

The couple operate as The Wall Group and own four Spar stores around the Belfast area. The new store, which replaces their former store on the site, provides employment for an additional 30 local team members, taking the total number of staff at the store to 50.

Helen Wall, co-owner of The Wall Group, said: “When we were researching ESELs for our newly refurbished store, we visited a local EuroSpar and immediately we were struck by how professional, modern and smart the ESELs looked.

“We wanted to keep everything as high tech as possible in our new store and decided to install EDGEPoS ESELs from Henderson Technology in Landscape Filling Station. We were initially concerned by the cost of the ESELs, but learned that Henderson Technology offered the product on a seven-year rental agreement.

“When we were looking at ideas for the store, we were also focused on sustainability. There is lots of waste from paper SELs and we wanted to reduce the amount of paper and ink we were using instore.”

Colin Cunningham, The Wall Group manager, added: “The results have been immediate. We already completed two promotion changeovers and it has been so straight forward. Just a click of a button and the ESELs are updated instantly. This means that we have been able to free up staff to concentrate on other tasks.

“With the ability to change ESELs on the shop through the handset within seconds, this has saved us many personnel hours. Previously an employee had to scan the product, get access to the back office and print out shelf edge labels – which could be time consuming and laborious. Our employees no longer need to leave the shopfloor.”

Wall concluded: “With all the retail technology that we have introduced instore including ESELs and two self-checkouts and the investment that we have made in to these innovative products, we aim to increase sales, see a growth in our margin and utilise staff activity and productivity instore.”

Darren Nickels, retail technology operations director at Henderson Technology, commented: “We are very proud to work with Helen, Gavan and the team onsite in all four of the Wall’s stores in Belfast. They are a shining example of introducing innovative, forward-thinking retailers, adding retail technology products to their EDGEPoS system and future proofing their business.”