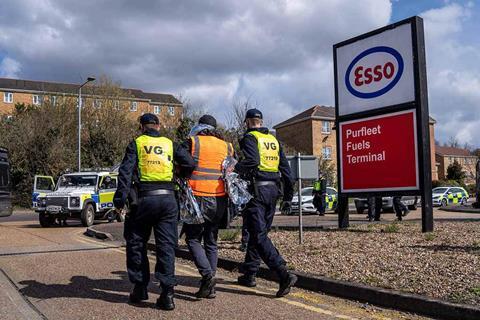 All but one fuel terminal in Essex is working normally after police action to clear climate protesters, but forecourts in some areas, including supermarkets, are reported to have run out of some grades of fuel.

Essex Police reported they had made 192 arrests during the protests including 24 people who had been arrested more than once.

Essex Police assistant chief constable Rachel Nolan said: “Our response to these protests have now entered the fifth day. Thankfully, we have been able to keep the disruption caused to the affected businesses to a minimum and all but one are now reporting business as usual.

“There is a small number of people who continue to protest, and we are working to resolve this as quickly and – most importantly – as safely as possible.

“We are continuing to work alongside our key partners on this issue and our priority has always been to bring this incident to a safe conclusion and to bring the areas affected back to normality as quickly as possible.

“A large element of that is our proactive response, which again has yielded results in the last 24 hours, with 20 arrests made.

“As a result, no new protests have been reported on any sites in the area.

“I want to again emphasise that policing is not anti-protest; we will always endeavour to facilitate protest where we can.

“However, we must be robust when laws have been broken, that is what our community expects of us. That means making arrests when other options have been exhausted and, where we can, pursuing action against those who we believe have broken the law.

“We are in dialogue with the Crown Prosecution Service, as well as other forces, as we seek to achieve that.”

However, there were accounts of fuel shortages in the media with Birmingham Live reporting a number of petrol stations had put up signs warning drivers that they had no diesel, while others had to shut completely because they had run out of fuel.

Sainsbury’s supermarket confirmed issues in its petrol supply at Harlow in Essex. Responding to a customer’s complaint on social media, it said: “We’re experiencing high demand for fuel and some pumps at our Harlow petrol filling station are temporarily closed. We’ll reopen the pumps again as soon as possible and we’re sorry for the inconvenience this may cause.”