A fire has totally destroyed a Harvest Energy forecourt and Nisa shop in Richmond, North Yorkshire. 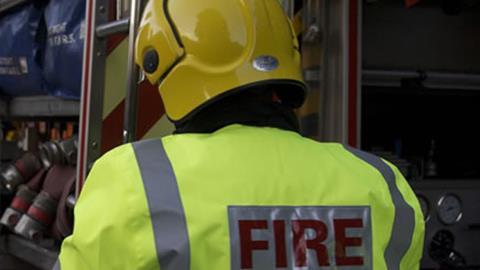 Staff were able to switch off the fuel supply when the fire was spotted and evacuated the building just after 2pm on Friday August 14, and no one was hurt in the blaze.

Eight fire appliances were called to tackle the fire, and fire fighters managed to prevent it spreading to any neighbouring buildings. By 9.30pm only two crews were required to damp down the scene.

However, Victoria Road, one of the town’s main roads, remained closed this week as Harvest Energy worked to make the site safe.

Richmondshire District Council’s environmental health team was working with them on health and safety issues, including the disposal of asbestos that was blown into neighbouring gardens.

Residents living around the site were evacuated out of their homes on Friday and taken to a rest shelter in Richmond School. All but four family groups have since been allowed back into their properties. It is unclear when the remaining residents will return.

A Harvest Energy spokesman said: “No member of staff or the public were injured. The site is secure and the situation has now been contained by the fire service. The company is working fully and transparently with local authorities. The cause of the fire is yet to be determined and there was no damage to nearby residential properties.

“We would like to take this opportunity to thank our team at Victoria Road Service Station who dealt with the outbreak of the fire in a calm and professional manner, and to the local emergency services who worked tirelessly into the night to contain the fire.

“We remain committed to ensuring the health and safety of our employees, the local community and the wider general public. We will also be taking steps to eliminate any subsequent damage caused to the local environment.”

“This was a major fire but thanks to the swift action of workers at the garage and the local fire brigade it was contained to the petrol station itself,” said council leader, councillor Angie Dale.

“We say a massive thank you to all the emergency workers who dealt with this blaze, and the people that ran the rest centre and looked after local residents. Harvest Energy is doing all it can to get the site safe enough for the road to reopen.”

North Yorkshire County Council leader, councillor Carl Les added: “This was a great example of all agencies working in partnership to ensure that the public were kept safe in a major incident. We deployed our Major Incident Response Team which was joined by the Local Resilience Forum Ready for Anything Volunteers to make sure the needs were met of residents and tourists affected.

“I’d also like to thank Richmond School for opening its doors to provide a safe place for people to shelter before they could return to their houses or recover their cars.”

Fire engines from Richmond, Colburn, Leyburn, Reeth, Bedale, Helmsley, Ripon, Darlington and Barnard Castle, along with an aerial ladder platform from Harrogate, incident command unit and a water bowser all attended the fire.