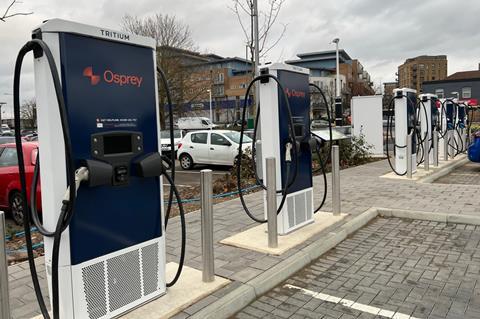 The rate of provision of public electric vehicle (EV) charging points is well below what is required if the government is to hit its target of 300,000 by 2030, according to latest figures published by the Department for Transport.

Using data is provided by the electric vehicle and charging point platform Zap-Map it reported that there were 30,290 public electric vehicle charging devices available in the UK on April 1, 2022, of which 5,494 were rapid chargers.

However, in order to meet the government target there needs to be an average of 30,000 additional devices a year.

The figures show an uneven geographical spread with London and Scotland having the highest level of charging provision per 100,000 of population, with 111 and 54 per 100,000 respectively. In comparison, the average in the UK was 45 per 100,000.

Matt Wills, associate partner and European head of forecourts and charging at management consultants at OC&C, said: “Surpassing 30,000 electric vehicle (EV) public charging points in the UK represents another notable milestone in the electrification of the UK’s motor industry. With the total EV fleet expected to equate to roughly a fifth of all vehicles on UK roads by 2030, there should be no illusions as to the scale of the task ahead.

“Greater provision of public charge points will also make EV ownership more attainable for lower and middle-income families, particularly when many are grappling with the rising cost of living. Despite a marked increase in the range and models of EVs on the market, they largely remain a product of the wealthy, in no small part due to greater off-street parking access.