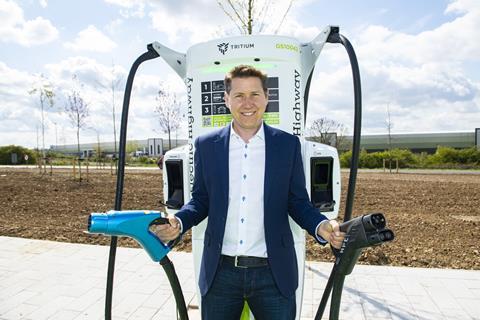 Gridserve has announced plans to revolutionise the EV charging infrastructure in the UK as it officially launches the Gridserve Electric Highway.

The plan includes a UK-wide network of more than 50 high-powered ‘Electric Hubs’ with 6-12 x 350kW chargers in each, plus almost 300 rapid chargers installed across 85% of the UK’s motorway service stations; alongside more than 100 Gridserve Electric Forecourts in development.

The overall objective is to create a UK-wide network that motorists can rely on, without range or charging anxiety, wherever they live in the UK, and whatever type of electric vehicle they drive.

The news follows Gridserve’s recent acquisition of the Electric Highway from Ecotricity, since when, in just six weeks Gridserve has installed new 60kW+ chargers at over 50 locations – from Land’s End to John O’Groats – at a rate of around two new charging locations every day.

The entire network of almost 300 old Ecotricity chargers at more than 150 locations on motorways and IKEA stores is said to be on track to be replaced by September, enabling any type of EV to charge with contactless payment options, and doubling the number of simultaneous charging sessions by offering dual charging from single chargers.

In addition, more than 50 high-powered ‘Electric Hubs’, featuring 6-12 x 350kW chargers, described as capable of adding 100 miles of range in just five minutes, will be delivered at motorway sites across the UK.This is a programme, which, according to Gridserve will see an additional investment of £100m-plus.

Gridserve Electric Highway’s first motorway Electric Hub – a bank of 12 high-powered 350kW Gridserve Electric Highway chargers alongside 12 Tesla Superchargers - was opened to the public in April at Rugby Services and is described as the UK’s largest high-power motorway charging site. It will act as a blueprint for all future sites, with more than 10 new Electric Hubs, each featuring 6-12 high power 350kW chargers per location, expected to be completed this year – starting with motorway services deployments in Reading (East and West), Thurrock, and Exeter, and Cornwall Services.

Funding to achieve Gridserve’s ambitions is being supported by a new investor in Gridserve, The Rise Fund, TPG’s global impact investing platform. The investment in Gridserve sits alongside Gridserve’s existing shareholder Hitachi Capital (UK) plc, and enables Gridserve to accelerate its purpose of helping to deliver sustainable energy at a scale needed to move the needle on climate change. With more than $5.5 billion in assets under management across its platform, The Rise Fund works with growth-stage, high-potential, mission-driven companies that have the power to change the world and help achieve the United Nations’ Sustainable Development Goals.

“We are excited to partner with Gridserve in helping to make EV charging in the UK a fast and anxiety free experience. We view this as critical to enabling the rapid decarbonization of road based transportation, especially for long distance journeys” said Edward Beckley, Partner at TPG and senior member of The Rise Fund’s climate investing team, who added:

“Decarbonised transport businesses, like Gridserve, are a core pillar of The Rise Fund’s climate investing strategy”.

Including the company’s Electric Forecourt in Braintree, the Gridserve Electric Highway network already includes more than 150 charging locations, covering 85% of the UK’s motorway network with the capability of charging almost than 400 vehicles simultaneously throughout the UK. 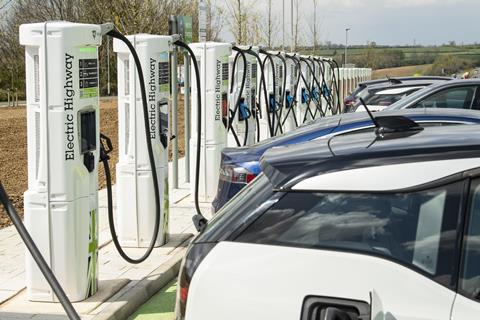 “Gridserve’s purpose is to deliver sustainable energy and move the needle on climate change, and the Gridserve Electric Highway – a network of easy-to-use, reliable, rapid and high power chargers right across the UK – is doing just that, eliminating charging anxiety and making driving electric an enjoyable, ultra-convenient and stress-free experience. We’re working at a phenomenal pace to roll out cutting-edge charging infrastructure and will continue to move heaven and earth to install new chargers en-masse in as many locations as we can, and as quickly as possible.”

Transport Minister, Rachel Maclean, said: “As we accelerate towards cleaner and greener transport, I’m delighted to see Gridserve leading the charge in the EV charging revolution. The UK Government has already set out plans to invest £1.3bn in accelerating the roll out of charging infrastructure, targeting support for rapid chargepoints on motorways and major roads to erase any anxiety around long journeys. Couple this with forward-thinking projects like the Gridserve Electric Highway, and there has never been a better time to go electric.”

To support continuity and transparency for EV drivers, Gridserve says all sites will continue to charge on a price per kWh of energy used basis. The price to charge at Electric Hubs is 30p per kW – enabling a typical EV to add 200 miles of range for £15, and £24p/kWh at Electric Forecourts, so just £12. Gridserve has also developed a new interactive map to make journey planning as seamless as possible. The map will include the location of each Electric Hub or Electric Forecourt; the charging connectors in each location; whether chargers are in use or available; and details about the facilities on offer in each location. Gridserve chargers are also being integrated with third-party services, including mapping service Zap-Map, to help all drivers access information on chargers as easily and as quickly as possible.

The Gridserve Electric Highway is just one part of a wider drive by the company to unlock net zero carbon EV driving across the UK.

All chargers operated by GRIDSERVE are supported by net zero solar energy delivered by its ‘sun-to-wheel’ infrastructure – a network of grid-scale hybrid solar farms which ensure that every kW taken from the grid by EV charging infrastructure is netted off against zero-carbon kW’s of solar energy put back into the grid.

In partnership with Hitachi Capital (UK) PLC, the company also offers Gridserve Electric Vehicle Solutions, which claims to be the UK’s first net zero carbon EV leasing business. The net-zero carbon energy delivered at Gridserve’s charging points can be included in monthly leasing payments, meaning drivers can charge at any Gridserve Electric Highway charger without paying additional monthly costs for energy. This removes a key barrier to mass EV adoption, enabling people to accurately compare the cost of leasing a petrol or diesel vehicle, plus fuel, with an EV with energy included. The aim is to reflect the true overall cost to the consumer and is useful for the 40% of people without access to off-street parking.

Those leasing an EV through Gridserve will also soon benefit from Autocharge technology being introduced at all Gridserve Electric Highway chargers in the near future. By using the feature, drivers can plug in any type of EV with a CCS connector and the charging session will immediately start, without needing to swipe a contactless payment, or use an RFID card, further simplifying the process. This will be rolled out across the network with the launch of Gridserve’s new App, which is in the final stages of testing.

Gridserve also works with a tree-planting organisation which plants 100 trees for every EV leased through the service - 10,000 trees are now in the process of being planted since the electric vehicle leasing business was launched in December.