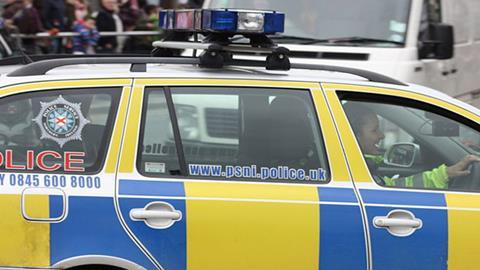 A man wielding a pitchfork was among a mob caught on camera fighting on a forecourt in Northern Ireland.

Detectives in Derry / Londonderry have arrested six men following the brawl at a petrol filling station in the Buncrana Road area on the afternoon of Tuesday August 17.

Police attended after a receiving a report at 12.40pm of men brawling on the forecourt of McGinley’s petrol station.

They arrested six men on suspicion of a number of offences and also closed the Buncrana Road temporarily as a number of vehicles had been involved in collisions.

A video of the incident circulating widely online shows a car towing a caravan veering onto the forecourt of McGinley’s petrol station and shortly after a car ploughs into another one queuing outside the service station.

While in the foreground a woman can be seen lifting a young child from one of the damaged vehicles, a number of men run into view, with one wielding a pitchfork and start fighting.

The fighting spilled into McGinley’s Spar shop, where police arrested a number of men.

The shop had to be closed for the remainder of the day after staff and customers, including young children, were left traumatised.

Detectives are appealing for anyone who witnessed the incident or has any information that could help with their enquiries to contact them in Strand Road on 101 or Crimestoppers anonymously on 0800 555111.